25 May Crowdfunding and Venture Capital: two complementary systems for private funding in the health sector

As we already know, public funding is not enough to cover the entire life cycle of a company in the health sector. In fact, it is becoming increasingly common for public funding sources to contain in their terms and conditions the requirement that there must be a percentage of private funding within the project.

Private funding, and in this case non-bank funding, is the main funding alternative for most business projects and Venture Capital is the main vehicle for this.

The origins of Venture Capital activities in Spain date back to the 1970s, led by the public sector with the intention of promoting the country’s industrialisation process and the transformation of certain regional economies from the primary sector (agriculture, livestock, and fishing) to the secondary sector. Spain’s entry into the European Union and the attraction of foreign capital significantly boosted private activity, which in the early 1990s already outweighed public activity in terms of resources managed. The late 1990s and the turn of the century were marked by the “boom” of technology and internet companies that would later expand into the biotech sector, which shifted the focus of the industry from established companies to start-ups or companies in the early stages of development. The 2008 financial crisis in Spain further strengthened this financial alternative as banks were unable to lend money on affordable terms to these companies.

This type of funding is currently in good health, as BIOCAT shows in its BioRegion of Catalonia 2021 report. The report highlights that the investment captured by health start-ups has grown for another year in Catalonia. The ecosystem has once again surpassed the 200 million barrier and has set a record with 238 million euros raised in 2021. These figures continue to be led by Venture Capital investing a total of 187 million euros in 2021, where investment in biotechs continues to be the main driver. This same trend is also reflected throughout Spain, as indicated in the “ASEBIO 2020 Report”: the volume of private capital raised by the biotech sector during 2020 increased by 46% in Spain compared to 2019. But although Venture Capital is the most prevalent form of investment in terms of the volume of existing investment, there are other methods such as the 3 Fs (where the investment comes from the researcher’s immediate environment, i.e., Family, Friends, and Fools), Business Angels and Crowdfunding.

Venture Capital, at least in the health start-up sector, normally co-invests with other companies in high investment rounds when the start-up has a high degree of maturity. The problem lies in surviving in the steps prior to reaching this level of maturity, where public or private funding in seed rounds or initial rounds carried out by the 3Fs or Business Angels is not enough to have an advanced product to be of interest to the Venture Capital round, which is usually oriented towards clinical validation. Many start-ups fail when Venture Capital demands more experiments to elucidate mechanisms of action and/or pre-clinical phases in the case of drugs or the development of MD prototypes. This period of time is known in financial jargon as the “Valley of Death” and corresponds to the period from the moment a start-up receives its initial funding until it manages to obtain revenues for itself. This is where crowdfunding has come to fill this gap, preventing many of these promising start-ups from perishing due to lack of investment to advance their research. Other recent instruments worth mentioning are early-stage investment vehicles such as GENESIS Ventures and GENESIS Tech Transfer Boost, which invest small tickets in immature projects with the aim of accelerating their development and reaching key value milestones to create the company and attract a first round of investment from other venture funds.

Crowdfunding is an alternative that emerged in countries precisely because of the lack of little capital to finance projects in the early stages of the life cycle. Crowdfunding brings together many small investors where the minimum amounts to invest can be very low and who otherwise would not have the opportunity to invest. The maximum amount of funding that a company can obtain through this method in Spain is €2M. The number of investors is very high and to facilitate management, investors are syndicated to grant power of attorney in decision-making in favour of the founders.

The following table compares the different models of private funding: 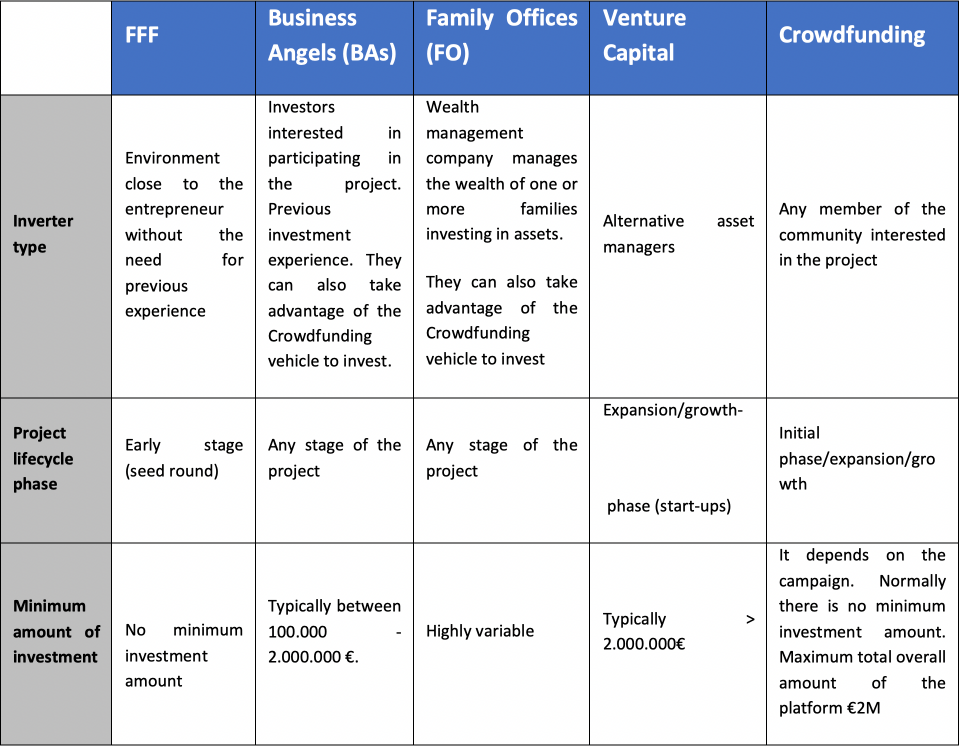 There are currently several crowdfunding platforms in Spain that include the health sector among their investments: Startupxplore, Crowdcube, Dozen Investments.

Nevertheless, the only crowdfunding platform specialising in attracting investment for companies in the health sector is Capital Cell, through which fourteen million euros were raised in 2020, contributing to the closure of fourteen rounds of financing, compared to ten million euros in 2019. And in this 2021 this figure has been increased to reach more than 17 million euros in the completion of 18 rounds of investment, constituting a very important proportion of the health sector rounds of 2021 according to the newspaper Expansión.

Therefore, we are observing how crowdfunding is becoming an increasingly important part of the rounds in the health sector as reflected in the aforementioned newspaper, which showed how several of the most important rounds in this sector in 2021 in Catalonia correspond to this type of investment.

There is every reason to believe that this form of investment will continue to grow. The emergence of COVID and the emergence of vaccines and other medicines has changed the perception of the small investor towards this biomedical sector, turning it into a value of interest with a very attractive investment multiplier.